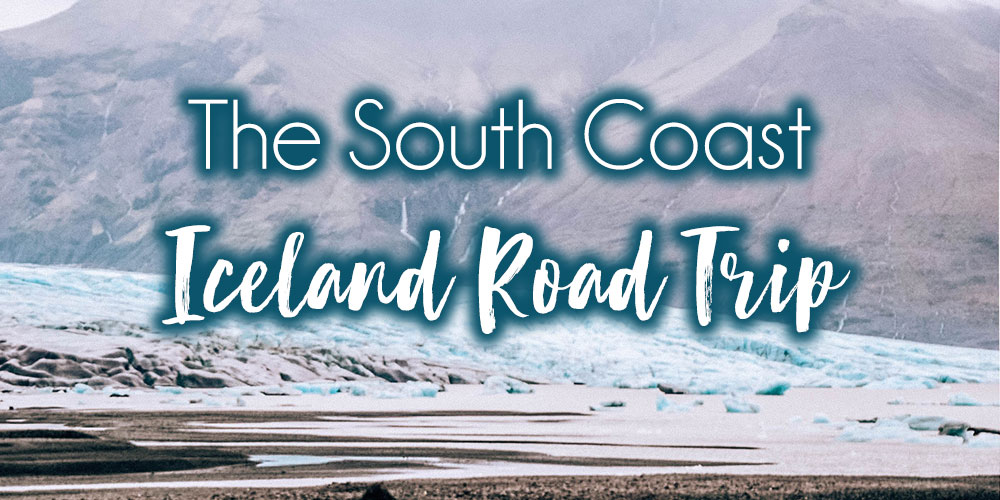 So if you have been following our 12 day Iceland itinerary you would have seen that we completed our Golden Circle day trip. If you aren’t sleeping in a campervan you check out this review about Hotel Ranga.

From there we headed to Seljalandsfoss on Iceland’s south coast where we had a super rainy and windy evening. As a positive person I would like to say that the wind wasn’t so bad. On the other hand I had to ask my boyfriend multiple times if the wind was going to tip us over because it was so crazy (we didn’t tip over, lol!). If you have been reading about Iceland, you may have probably read that the wind can blow doors off hinges, this is so real it’s not even funny. We had to hold onto car doors and really make an effort to get the doors closed in some cases. Our route along Iceland’s south coast included some pretty beautiful sites, and it was fairly easy to navigate since they were all located on route 1.

We survived that night only to wake up to more wind and rain the next day. Today was the start of our South coast exploring and so we bundled up all waterproof and warm and decided to explore Seljalandsfoss. This waterfall was absolutely stunning. You could walk behind it and really enjoy the waterfall, except on a rainy, windy day. We were completely wet, thank goodness for our rain gear! We got some cool shots but then it was time to move on, the tour buses started to roll in around 9am and it got busier and busier.

From Seljalandsfoss we headed to Skogafoss. This waterfall just looked so powerful, it was really impressive. Unfortunately the pouring rain deterred us from taking the hike up to the top of the waterfall. We snapped a few pictures again and hit the road. Also there were so many tourists around! Bus loads of them which surprised us since it was the middle of October and also Iceland’s “low season”. So we started our drive to Vik. One of our top tips for visiting Skogafoss would be to get there super early in the morning. Clearly the tour buses start arriving at these sites 9am and onwards so get up early and beat the traffic. 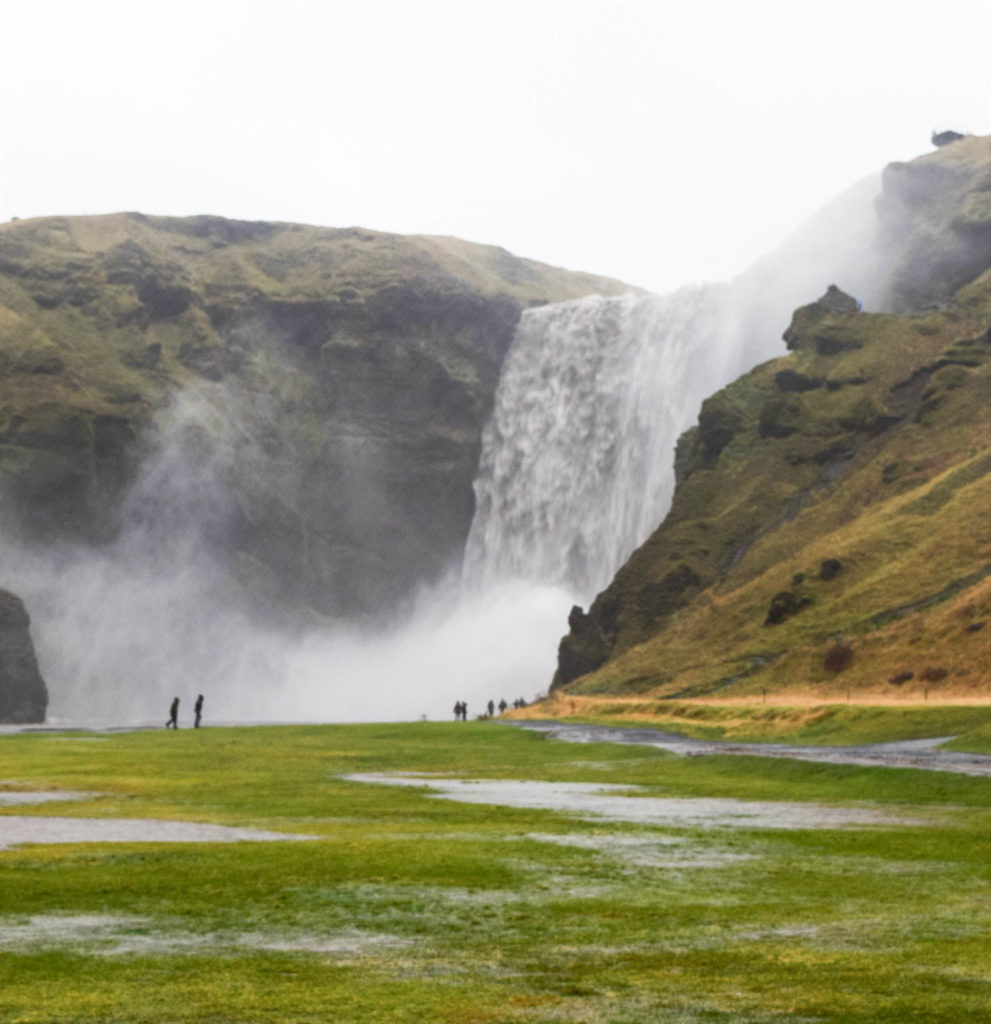 Skogafoss waterfall on the South Coast of Iceland

The wind and rain did not easy up at all on the drive along Iceland’s south coast but when we finally pulled up to one of the black sand beaches we had a break in the rain, geared up and we ran outside to take in the scenery. We spent some time here taking pictures and squeezing in between people for our picture on the basalt columns. It was really quite an impressive site. This was the first set of basalt columns that we saw but definitely not our last! We missed out on exploring the town but we drove up to the church and snapped some shots and found some Icelandic horses and then it was onwards to Skaftafell National Park. 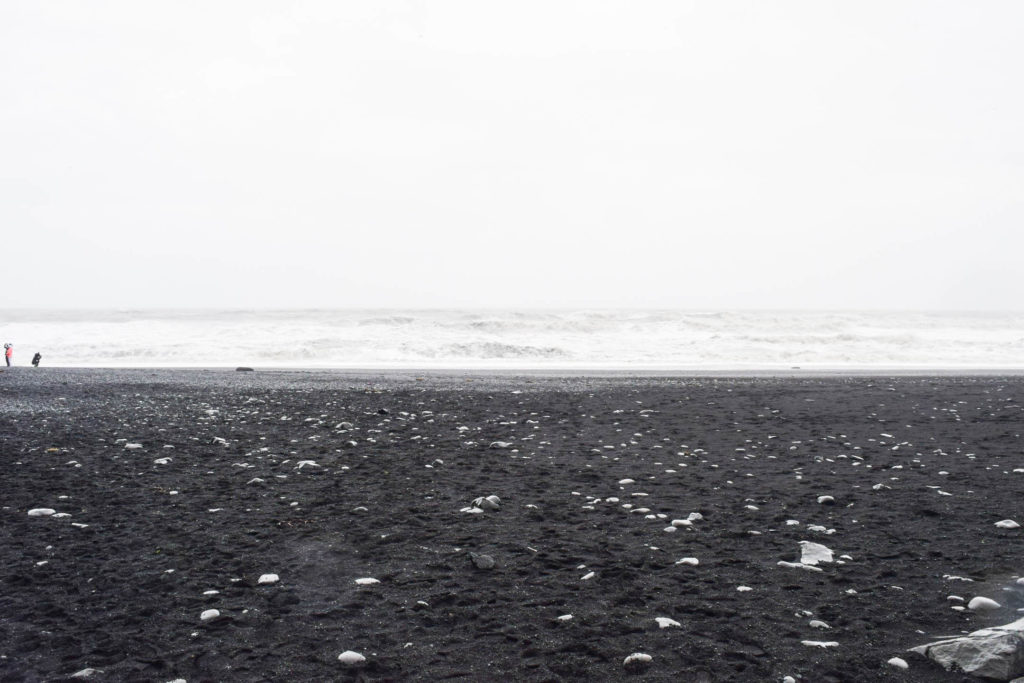 Black Sand beaches on the South Coast of Iceland

The drive to Skaftafell was drop dead gorgeous. The rain held up for a bit and we took detours on as many paths as we could and stopped for pictures at almost every turn. Iceland’s south coast was simply stunning. 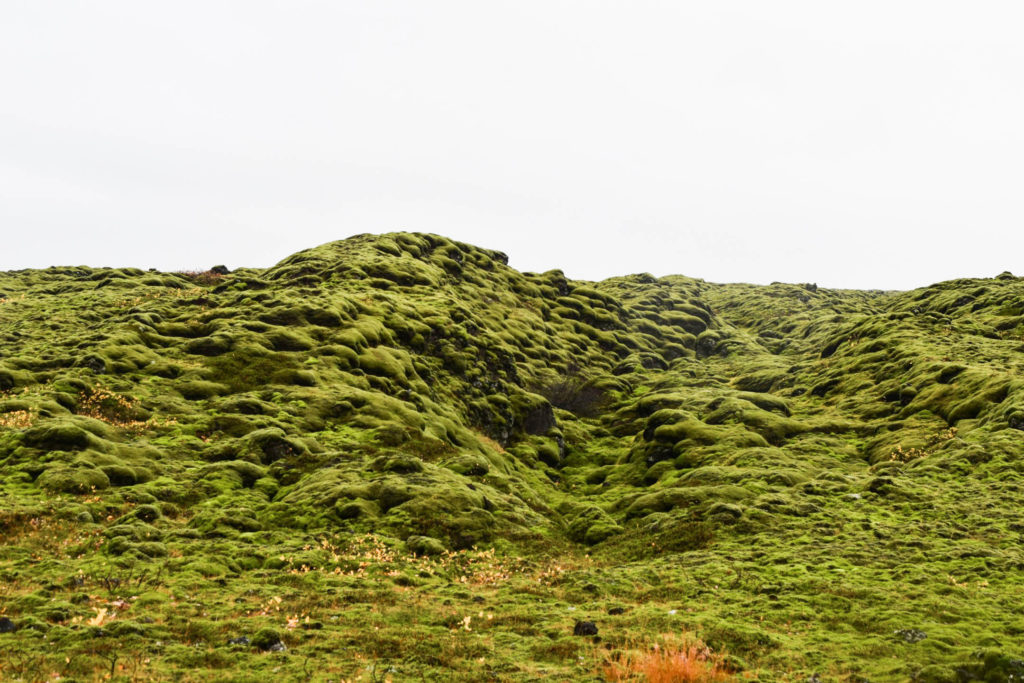 I’m pretty sure this is where the Fairies and Elves live. 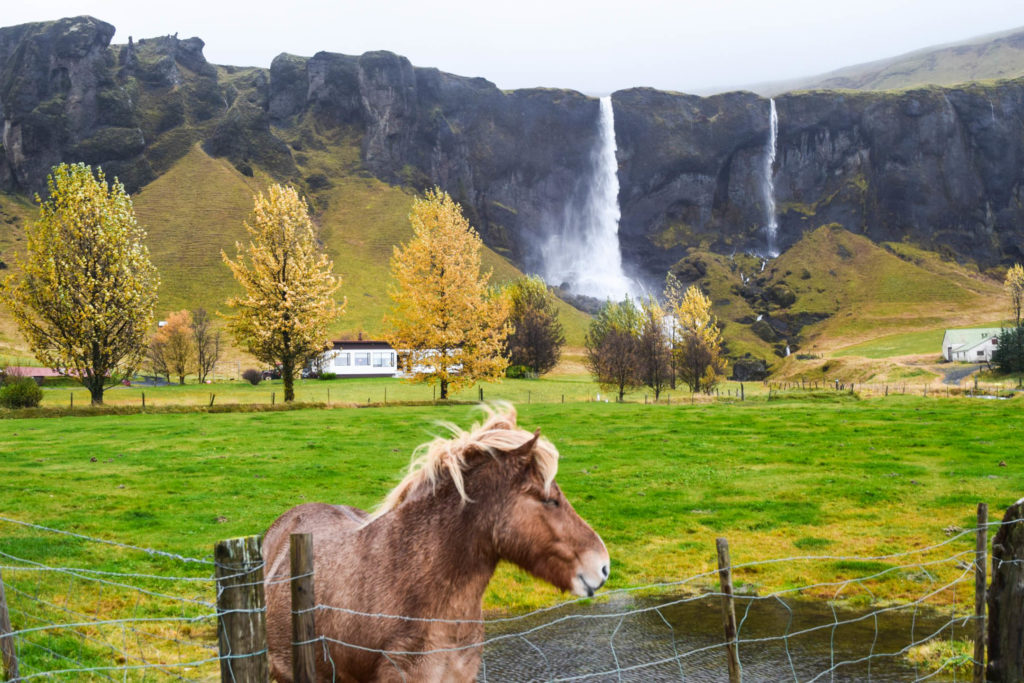 Basically summed up Iceland in one shot, horses, waterfalls and beautiful scenery. 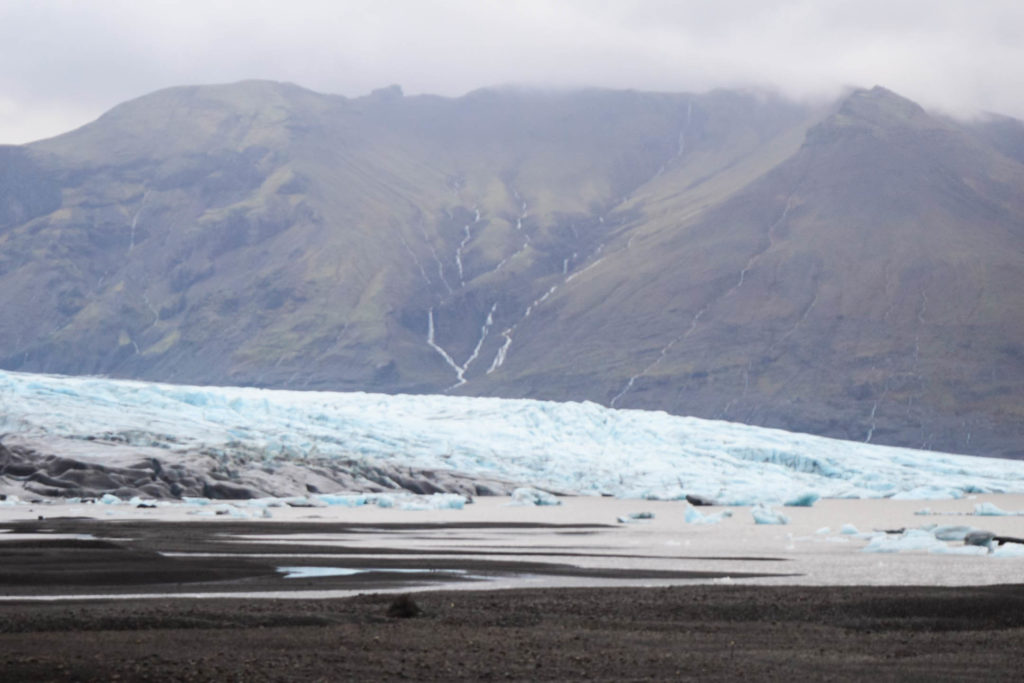 Finally, we reached Skaftafell, our intial plan was to get there and hike to Svartifoss and camp at Jokulsarlon. We lost track of time with all the stops we had made and got to Skaftafell at around 4pm, way too late to do the 2 hour Svartifoss hike. Instead we walked down towards the Skaftafellsjökull glacier and decided to camp at Skaftafell and visit this iconic waterfall early this next morning.

We woke up at 7am, it was still dark, and had a big breakfast and coffee. It was our first sunny day in Iceland and we could not have been more excited. 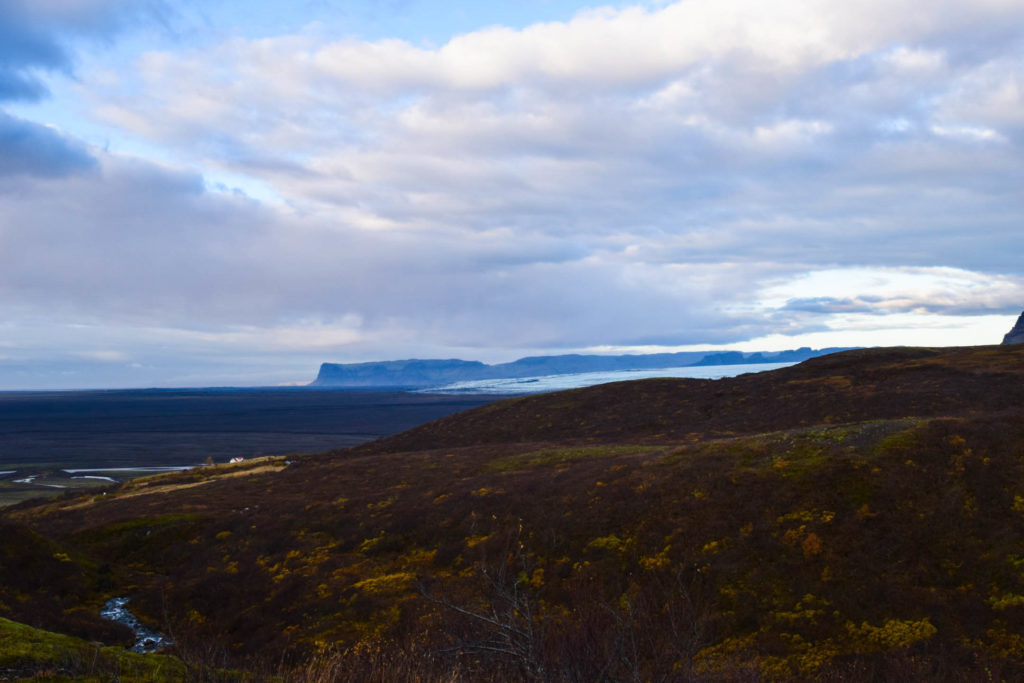 Views from our hike to Svartifoss early in the morning.

We were two of the first people to arrive at Svartifoss that morning so we got loads of pictures before people started to arrive. The early start had paid off! Make sure you stay on the pathways and do not forget your water bottle! 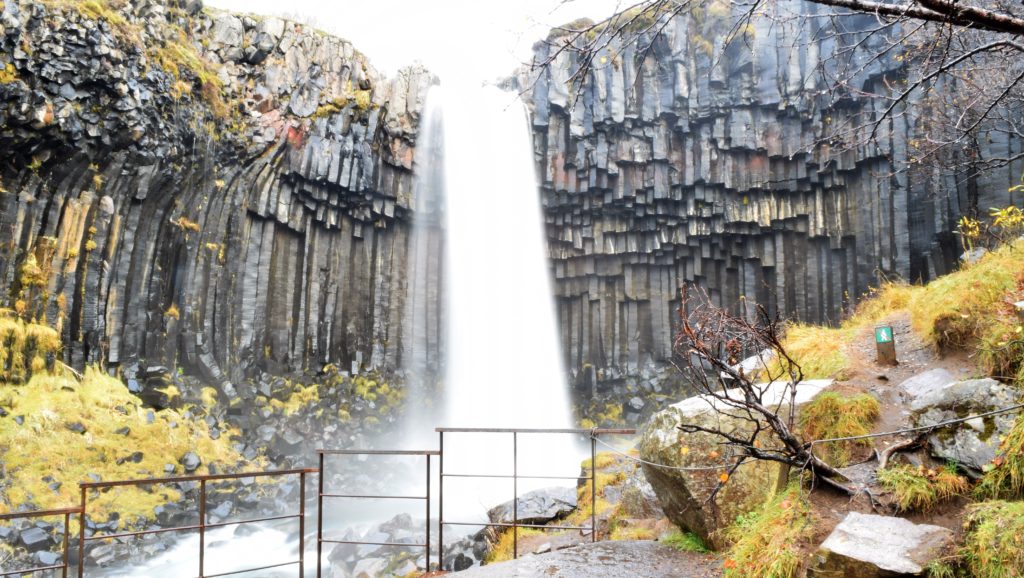 Svartifoss was well worth the hike.

From Svartifoss our plan was to drive east out to Jokulsarlon and then to Seydisfjodur. It was a long driving day with plenty of stops, just getting out of Skaftafell was hard enough, just look at these views! 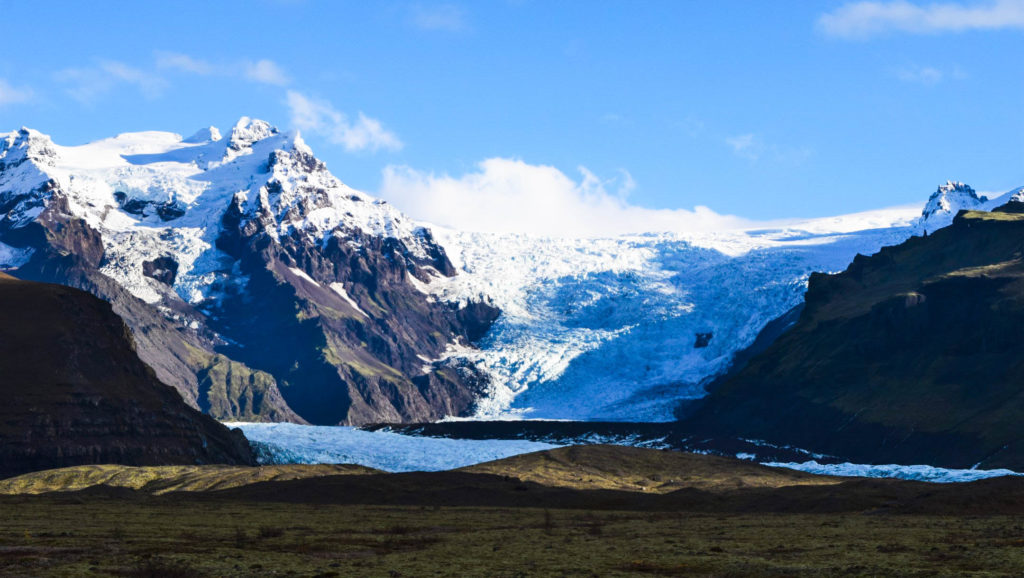 After many more glaciers we reached our first glacier lagoon, Fjallsarlon. It was absolutely breathtaking, so peaceful and picture perfect. There were a handful of people here at Fjallsarlon, so it really felt off the beaten track compared to some other spots we found. 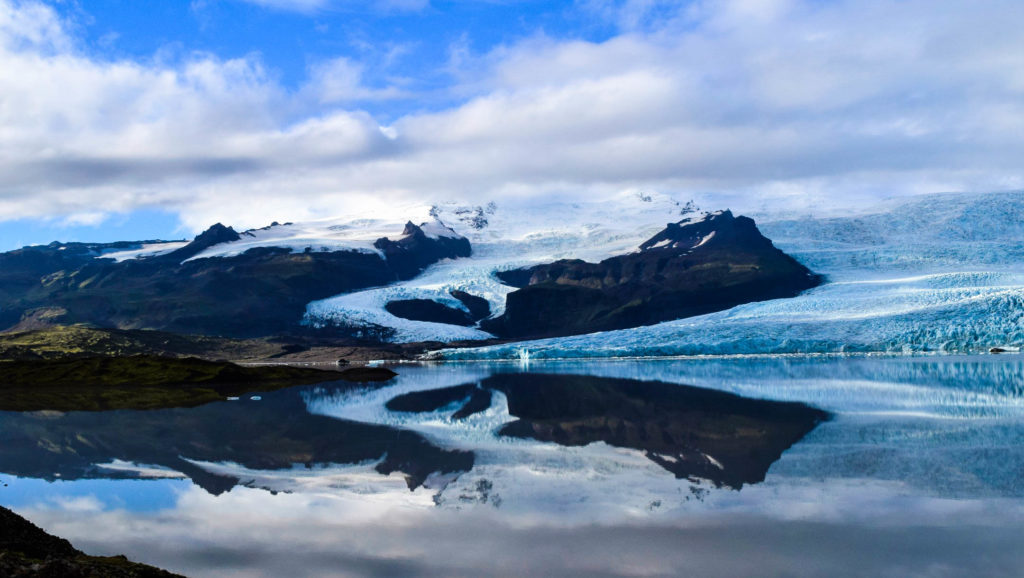 Fjallsarlon on a bright sunny day

After many, many photos at Fjallsarlon it was time to head to the bigger (more touristy) Jokulsarlon. I was not looking forward to seeing all those tour buses again. We pulled up at the first car park before the bridge we realized we had picked the right side. All the buses were parking at the other car park, so it was just us and a few other photographers. It was actually just as peaceful and we saw lots of seals playing around the icebergs. It was simply magical and just something you don’t see everyday. You can easily squeeze this in even for a weekend getaway in Iceland. Find more about the highlights of the South-East coast. 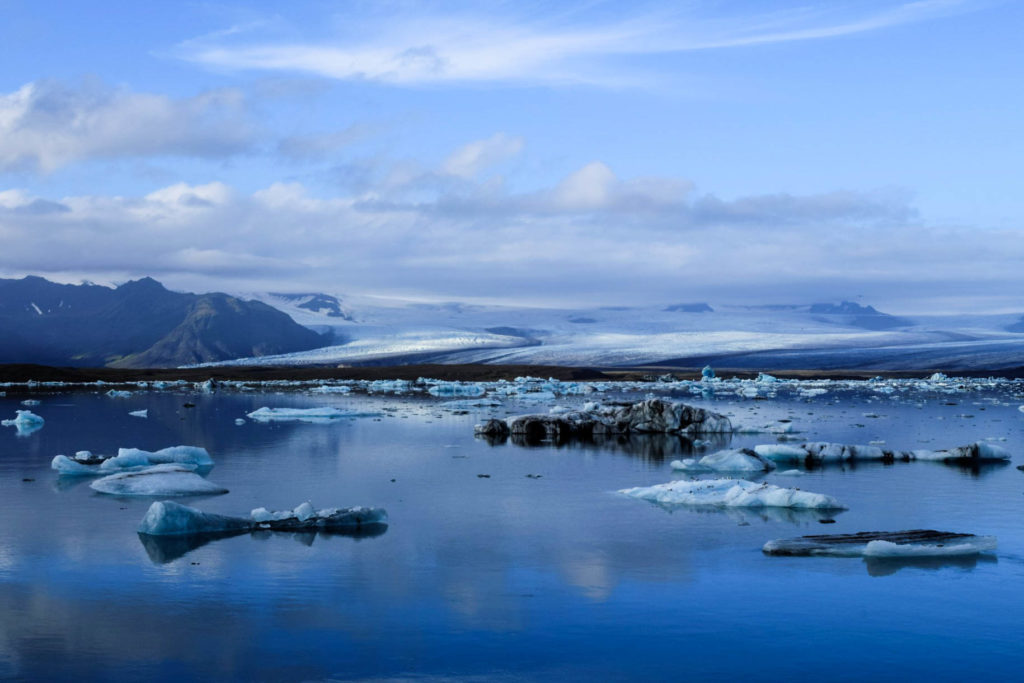 We crossed the road to check out the beach which looked like diamonds sprinkled across the black sand. Mother nature is just amazing. From here we had a 3 hour drive to reach Seydisfjodur along the Eastern fjords. 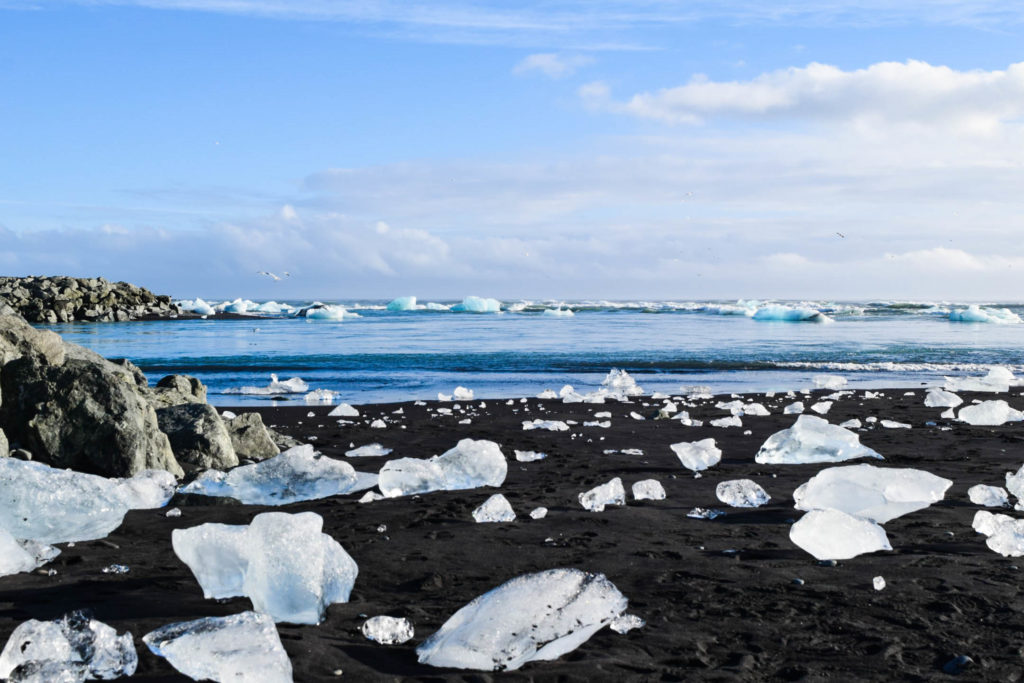 The black sand beach near Jokulsarlon