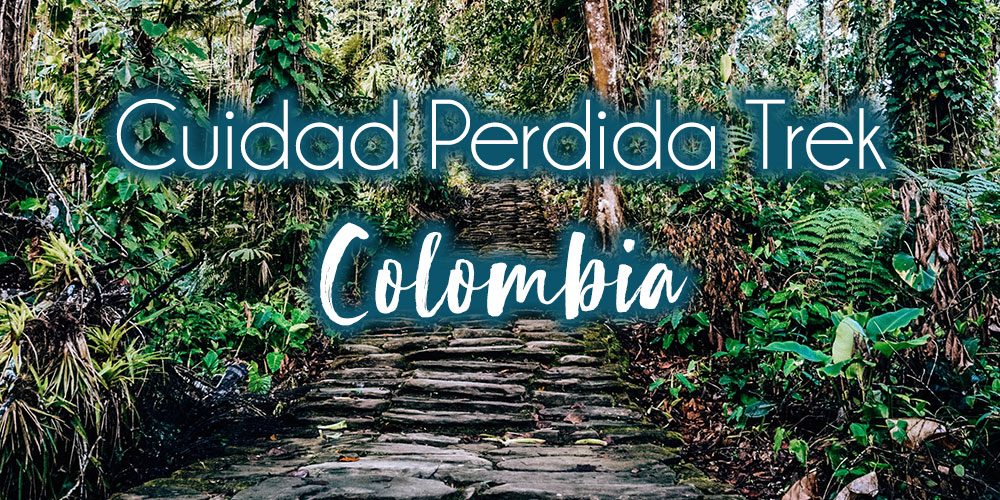 So once you’ve checked off your necessities for Ciudad Perdida and packed as light as possible, it was time to start the hike. I ended up hiking to Ciudad Perdida or The Lost City with Magic Tours. Our guide only spoke Spanish but one of the girls translated for us. He was very knowledgeable.

We left the magic tours office around 9.30am and got to our lunch stop in Machete for about 12.30pm. This was also the starting point of our hike to Ciudad Perdida. We left Machete after lunch in the hot sun and we headed up the mountain. It was about 4 hours until we reached the camp. The camp was right on the river. It had bathrooms and showers along with a line of bunk beds with cooking facilities and tables. There was also a pool which was a nice way to end the day. The pool was freezing because the water comes down from the mountains. Nevertheless it was still a great way to end a hot day. We were woken at 5.30am to start the hardest day of the trek. Not only was it long but there was a lot of up hills. We made it to the next camp in 4 hours. This is where we had an early lunch and enjoyed some time in the pool. We were enjoying the luxuries of spending time in the pools, but little did we now the hardest part was still to come. After lunch we started our hike again. This portion was mostly uphill and it was tough. Slow and steady was the key here but even then we needed to take some breaks. The heat and humidity of the rainforest was just draining. For an island girl I thought I would be able to take it but it was tough. The terrain varied from rocky to muddy to lose dirt which made it even tougher. After a few fruit stops, river crossings and climbing over rocks, we made it to our campsite around 4pm. We were spending the night at the final camp before hiking to Ciudad Perdida. Indigenous village on the way to The Lost City

The day we were all anticipating. The morning we would finally see the Lost City. After climbing over rocks and trees and rivers we made it to the steps. Hundreds of uneven stairs later we reached the walls of the Lost City or Ciudad Perdida. The excitement was real, and we realized how big this place really was. Photos from Google don’t quiet do it justice, you only ever see one shot, “the golf course shot”. There were hundreds of terraces that used to be home to about 2500 indigenous people. It was an impressive site to behold. We sat and took in the view from the top, listening to the stories of tomb raiders and the indigenous tribes. Our reward after all those stairs was a junk food binge. We were given potato chips, pork rinds, brownies, lollipops and chocolates! After we went around another way finding more terraces that were still covered in bush. There was even a family living in this area still and taking care of their land.
We walked back down the stairs and back to camp where we had our lunch and then onwards we went back to the second camp we visited yesterday. The Lost City still hidden away in the jungle

The stairs to the ceremonial terraces of the Lost City

Today consisted of a 4 hour hike to the end, we  got up at 5.30am and had breakfast before we started. The goal was to reach Machete by midday for lunch. The promise of fresh clothes and a shower at the end motivated us. The path was the same one we had walked 3 days earlier. At around 11.20am we reached Machete for lunch and a well deserved beer. We boarded our Jeep and sat in silence as we were carried back to town. On top of the world over looking Cuidad Perdida

I loved my experience with Magic Tours and would definitely recommend them. The food was amazing and I met some cool people. Together we completed a hike that only about 14000 tourists do each year. It was rewarding and definitely felt like a lost city. I didn’t know what to expect other than an epic photo at the end. I was so happy I went for it and braved the Colombian jungle with its bugs and crazy heat to find this special place. Ciudad Perdida is now home to a military base so it is also quite safe. Our guide and cook took very good care of us and we all made it without injury. If you are up for a challenge then it is something I’d recommend.