11 Tips You Must Know Before Driving in Scotland 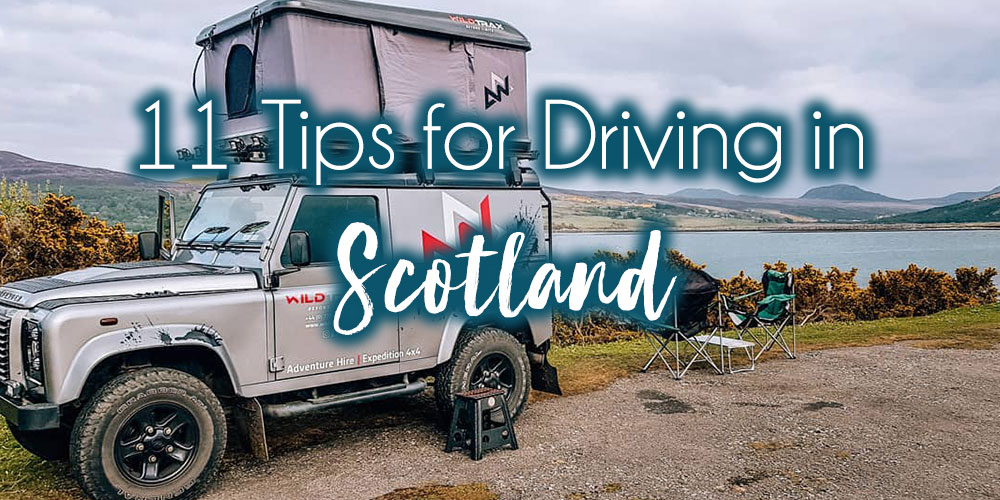 We knew nothing about driving in Scotland, but after spending 10 days in Scotland, we must say that we learned quite a bit on this trip! We opted to rent a car with a roof top tent which you can check out in this vlog episode. We loved the look of the Land Rover Defender and just knew it would be ready to take us anywhere! That’s exactly what it did, from off road drives to small villages around the north coast 500 (NC 500). We drove roughly 1200km in about 9 days, not including our little off road adventures. During this drive we learned a lot about driving in Scotland that we thought we needed to share!

— This post contains affiliate links, this means when you purchase one of the items below, we get a small commission at no extra cost to you —

Did you know we post weekly YouTube videos? We also have a bunch of awesome videos from our Scotland trip! Click the button below to check them out! Make sure you subscribe while you are there.
Watch the Vlogs now!

Things to Know Before Driving in Scotland

1. They drive on the left side of the road

This was easy for us as we also drive on the left side of the road here in Barbados, but if you are from the US, Canada or even Europe, that’s a big adjustment! Luckily they remind you occasionally with road signs.

2. The Roads are well marked

It was hard to get lost when driving in Scotland! Everything is well sign posted that you really can’t miss too much! Even all the attractions along the route were sign posted which was great for us as we didn’t have enough time to do more research about this trip!

3. Make sure you use the right fuel!

In Scotland the Diesel is black and the unleaded is green, make sure to check with your rental car company about what fuel to use before you start your trip!

4. Prepare for the Crazy Scottish Weather

While we were there in May we literally experienced, hail, flurries, rain, and bright sunshine all within about 2 hours. Just know when enough is enough, if you no longer feel comfortable driving on the road then it may be time to visit the nearest pub and grab a drink.

This may sound crazy for Scotland but they have a zero tolerance policy for drinking and driving, so do not go to the pub and have a pint and expect to get behind the wheel again. The roads can be dangerous especially when you are not used to driving there.

We travelled with EasyJet for the first time ever to Scotland! This meant 1 backpack each to carry on board! Find out how we managed to pack all of our clothes for Scotland in one 40L backpack!
Show me how!

Even if we did manage to get a bit confused or we missed a turn and had to pull over, we never had impatient drivers blaring their horns behind us. People also waved once you let them pass.

We definitely didn’t realize this until we reached John O’ Groats, but the roads between John O’Groats and Applecross were basically single lane with occasional “Passing spots”. This means that the first person to reach the passing spot will pull aside and allow the other car through and then you proceed with #3 and give each other a little wave to say thank you and then continue on your way until you meet another car.

8. Drive slowly on the winding roads!

This is pretty common sense but I’m still going to lay it out there… Take your time driving those winding roads! Sometimes passing places were quite far apart, occasionally there were some located along the bends, but if you don’t see a passing place close to the bend then proceed slowly around the bend. If there is oncoming traffic then pull over to the nearest passing place and allow them to pass or vice a versa.

9. Opt for an Automatic Vehicle over a Manual

In most European countries they do charge a bit more for an automatic vehicle, but honestly it really would have made a difference for us. Poor Jason got so tired of changing gears up and then back down when he had to pull over. He said an automatic would have made things so much easier.

10. Do not just stop in the middle of the road to take pictures

There are loads of passing places along the way and even special car parks at certain scenic spots. So avoid stopping in the middle of the single lane road to get that epic shot, just drive forward a bit more and pull off in a properly marked area.

11. Watch Out for Wildlife!

Mainly highland cows and sheep! We came across multiple animals along the road sides as we made our way along the North Coast 500. Slow down as you approach the animals so you do not frighten them into the road!

If you do opt for an awesome Land Rover Defender for driving around Scotland then here is a bonus tip for you! When you rent a Defender you are automatically enrolled in the Defender’s Club. Basically, every person driving a Defender waves at the other person (passengers can also wave). So be a good sport and make sure you wave back!

Let’s get social! We love sharing all of our photos with you guys, so jump over to Instagram and follow us there!
Follow Us!
Hopefully these tips are helpful for when you are planning your Scotland road trip along the North Coast 500. Driving in Scotland was definitely not that scary, but you definitely need to be aware of certain things. The main thing is to enjoy your Scotland road trip, take your time and drive slowly and soak up all the amazing scenery that Scotland has to offer.