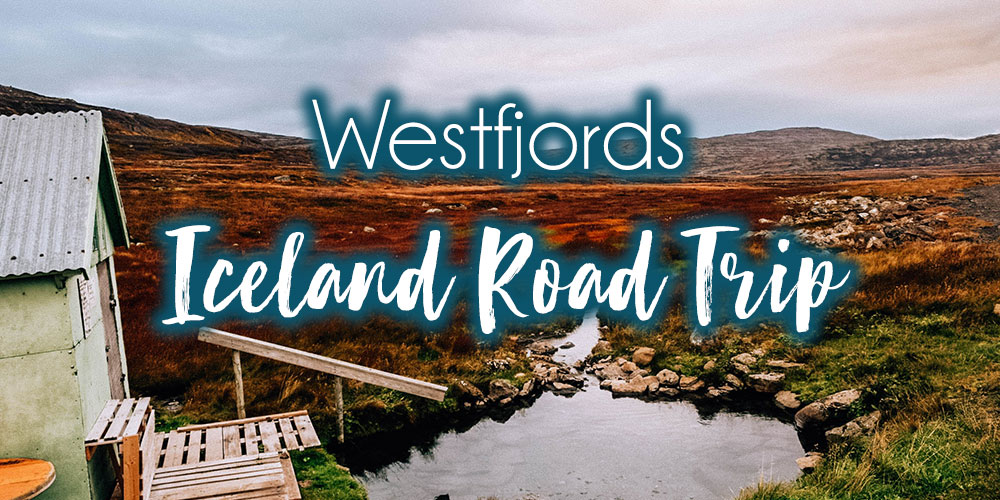 Part of our Iceland itinerary included Iceland’s westfjords, we were excited since not many tourists make it out this way. I also had starred off a lot of hot springs along our route, which meant lots of warm baths. After our beautiful sunny few days along Iceland’s north coast, we had officially entered Iceland’s westfjords.

After Hvítserkur we continued along our drive on the road to Holmavik. The views were absolutely stunning, we drove in and out of a few fjords and it was just perfect in the sunny weather. Welcome to the Westfjords Our campervan atop the mountain

After a couple of hours of driving we reached Holmavik, it is such a cute small town, with a gas station! We drove through and saw the Museum of Icelandic Sorcery and Witchcraft (true story) and a few houses with fairy houses outside (Oh Iceland you’re so cute). We were excited to reach our camp spot for the night. I had starred off a spot which was meant to have a hot spring so we went searching for it. We took road 643 and pulled up to Hotel Laugerholl. There was a pool, and a hot spring that was blessed by a Saint. We showered and jumped in the pool just as the sun was setting. It was just beautiful. Blessed hot spring, water is fed to the pool from here There was a campsite just a bit further down from the hotel, we set up camp and made dinner with a bottle of wine. Northern Lights were meant to be out again tonight but the clouds also came out so we didn’t get to see them.

Today was going to be another long driving day, we were determined to find some more hot springs in Iceland’s westfjords that were hotter than body temperature. We got up early and got going, our first stop was only a short drive away which I found using these co-ordinates 65.9171830, -22.3417500. Plug them into google maps to find this awesome pool. The water was only warm so we snapped a couple pictures and searched for the next one on the list.

We continued along road 61 until we reached a road 633 according to google maps. It was more of a dirt track, which didn’t really seem to be a road anymore, so maybe just take the long way around via road 61, trust me. Our first stop was at Hörgshlíðarbær pool, which I found using these co-ordinates 65°49’51.7″N 22°37’44.0″W. We tested it out and it was also luke warm so we opted not to jump in.

Our next hot spring was located at Heydalur, there was also an indoor pool here. Once again the water was not warm enough for us so we just grabbed a coffee and wandered around the place for a little bit. We were told they have an artic fox that plays with the dogs but we couldn’t find him that day. Our first hot spring of the morning. This pool was amazing, I loved that it was right on the water. A view from the hot pool at Heydalur

We headed back down road 61 until we reached our road, F-66. This road was probably the best road of the trip, we crossed a few small rivers and drove over a mountain and had some epic views. Definitely only do it with a 4 wheel drive though! One of many amazing waterfalls along F66

We finally joined road 60 and followed that up to Flokalundur where we continued along road 60 with every intention of camping at Dynjandi that evening. Unfortunuately the weather was looking pretty grim that direction and it was still early so we opted to find another hot spring which was on the way to Bildudalur. We spotted the pool and went to explore and then found the best and hottest spring of the whole trip. So we cracked a bottle of wine and jumped in (more like eased in very slowly). You can search Reykjafjardarlaug hot pool or use these co-ordinates 65°37’25.1″N 23°28’25.3″W. We stayed in for about an hour and then we went to explore the tiny fjord town of Bildudalur. It was adorable, we were planning to camp there but decided it was still too early and we wanted to continue exploring so we decided to try and make it back to Dynjandi. Probably wasn’t the greatest idea on these mountain roads through Iceland’s westfjords. The rain started to come down again but we made it safely to Dynjandi and set up camp.

We tried to sleep through another windy and rainy night and when we woke up it was still going. This weather was really wearing us down, but we put on our rain gear and snapped a few shots of Dynjandi before we decided to leave. It was a little disappointing that we didn’t get great weather for these pictures but you got to work with what you’ve got. Dynjandi on a rainy day in the Westfjords

We had planned on making it out to the Latrabjarg cliffs today. Then we found out we were experiencing the remnants of hurricane Nicole so we wouldn’t be able to get there. So it was back to Flokalundur for gas, which wasn’t working. We couldn’t hang around there all day since we were catching the ferry at 6pm. Then we decided to drive out to Patreksfjörður where we thankfully managed to refuel. We spent our afternoon sitting in a coffee shop until it was time to head back towards the ferry. Despite the weather, we boarded the ferry which took us to Stykkishólmur.

If you are looking for more hot springs, check out this couple who found some in Colorado.